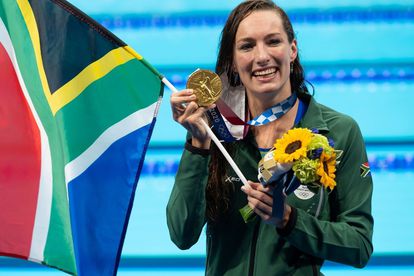 Talented swimmer Tatjana Schoenmaker made South Africa proud last year when she won the gold medal for the 200m breaststroke and set the world record for the event at the Tokyo Olympics. The 24-year-old swimmer also won the silver medal in the 100m breaststroke.

As per their website, the Forbes Woman Africa Leading Women Summit brings together female leaders in business, government and media to promote inclusion, gender diversity and to bridge the inequality gap.

The theme for the 7th annual Forbes Woman Africa Leading Women Summit was meant to reflect times, trends and topics around pandemic recovery.

An awards ceremony was held on Wednesday 9 March where several high-profile women were honoured. Tatjana Schoenmaker was awarded the Forbes Africa Sports Awards.

At just 20 years old, Schoenmaker became the first South African woman in eight years to earn a medal for swimming at the Commonwealth Games.

The summit coincided with International Women’s Day on Tuesday 8 March.

Celebrating International Women’s Day on her Instagram page, Schoenmaker wrote: “One woman can make a difference, but together we can rock the world.”

Tatjana Schoenmaker scored three nominations for the SA Sports Awards 2021. Following her success at the Tokyo Olympics, Schoenmaker has been nominated for Sports Star of the Year next to Springbok captain Siya Kolisi and Paralympian, Ntando Mahlangu.

She is also nominated for the Sports Awards People’s Choice and Sportswoman of the Year Awards.

The SA Sports Awards are set to take place on Saturday 12 March at the Durban International Convention Centre.