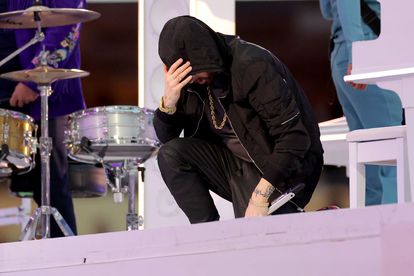 American rapper Eminem kneeled during his Super Bowl halftime show performance on 13 February despite objections from the NFL.

EMINEM KNEELS DURING HIS HALFTIME SHOW

Eminem followed in Colin Kaepernick’s footsteps and kneeled during his halftime show at the Super Bowl on 3 February. The Super Bowl was held at SoFi Stadium in Inglewood, California.

Eminem along with Dr Dre, Snoop Dogg, Mary J Blige and Kendrick Lamar performed at the halftime show. According to a report from Puck, Eminem was at odds with the NFL over kneeling. Kneeling is an act of protest against police brutality and racial inequality.

Kaepernick knelt during the national anthem at the start of NFL games in 2016. This was because he was protesting against police brutality and racial inequality in the US. Other players followed suit but this prompted the league to question whether the players should be penalised.

The NFL reps have since denied that they have had any differences with Emniem before his performance. A league spokesman, Brian McCarthy, told the New York Times that he was aware Emninem planned on kneeling. This was because he “watched it during rehearsals this week.”

McCarty went on to say that players were free to take a knee during the show because no one has been penalised for it.

The halftime show is currently trending. Dr Dre led the show which opened with his and Snoop Dogg’s The Next Episode which had the crowd fired up. The show which was started midway through the Los Angeles Rams’ hometown victory over the Cincinnati Bengals, was about 14 minutes long.

Watch the star-studded performance below.

“This was like my childhood all in one moment, so legendary seeing all of them on stage together my eyes got watery. I’m glad 50 Cent was brought on too. LOVED IT!” commented Diverse Mentality.

“I honestly cannot praise this enough! 5 fantastic legends coming together to put on one heck of a show! Well done to all of them <3 my childhood flooding back in less than 15 minutes!” commented Stephnie Moelker.