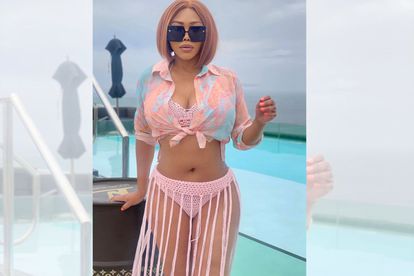 If there is one celeb who has not aged a day in the last two decades, it’s Sonia Mbele.

The former soapie star and Real Housewives of Jozi TV producer has amazed South Africans with her ageless appearance.

And many cannot believe the TV star is 45 years old!

Sonia Mbele had the timeline in a tizz when she posted pictures of her showing off sexy swimwear. “Wanna swim?” she questioned the thirst-trap images which went completely viral.

Many of her followers were shocked at her youthful looks.

“How do you remain forever young?”

“Vampire this one, no signs of ageing at all”

“Sonia Mbele musani ukudlala ngathi [don’t play with us], there is no ways ukuthi you’re in the mid 40s, Never!”

Sonia Mbele joins other celebs in Mzansi who have seemingly discovered the fountain of youth.

May tweeps have claimed that time has also stood still for actress and muso Thembi Seete.

Azania Mosaka, Melanie Son, Claire Mawisa and Terry Pheto may all be in their forties, but look at least a decade younger.