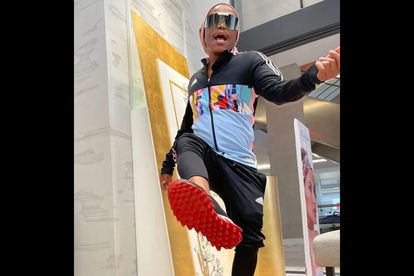 Media personality Somizi Mhlongo has confirmed that he is unemployed via his friend and television presenter Lerato Kganyago’s Instagram story on Wednesday 8 September.

In a video shared to Lerato Kganyao’s Instagram Story, Somizi and the television presenter spent a day out shopping and while in a store, Somizi uttered the words “this is what unemployment looks like” as he confirmed that he is in fact unemployed.

WHY IS SOMIZI UNEMPLOYED?

At the beginning of August, audio clips between the producers of Living The Dream With Somizi and his estranged husband, actor Mohale Motaung were leaked. In the leaked clips, the Rockville star revealed that he was physically abused by Somizi and described an instance where he was threatened with a knife.

“Now I see a different person. I was sh*t scared and walked back into the house. He said ‘let’s talk.’ He cried and we moved on,” said Mohale according to Sunday World.

In the aftermath of the abuse allegations, SABC announced that the media personality will be taking “some time off” from his gig on Metro FM.

A few days later, Multichoice released a statement saying that Somizi will also be taking “some time off” from his role as a judge on Idols SA. Somizi has not returned to either of the shows and has now confirmed that he has lost these jobs.

The former Idols SA judge was announced as a guest on The Braai Show With Cassper Nyovest on Tuesday 7 September and Tweeps were not exactly happy about this. They thought that cancel culture in the South African entertainment industry is selective and they are “tired of seeing” him.

While the former radio host says “this is what unemployment looks like”, it seems like his definition of unemployment is the polar opposite of most South Africans’ experience.

Somizi is still enjoying shopping sprees, as he recently splurged out at a Gucci store after he was accused of wearing fake Gucci items by an Instagram account.

He is also still indulging in relatively expensive items. However, it seems Lerato had taken him out for coffee. Taking to Instagram, he posted the image of his Starbucks drink with a quirky caption.

“Taken to lunch against my will…someone call 911-1011. Clues about the abductor…She has a deep voice. Speaks horrible isiZulu. Has two puppy brats. Eats lots of boiled cabbage and cant swim but has pools in all her homes…that’s all i know for now,” wrote Somizi on Instagram.

Although Somizi is unemployed, unemployment definitely looks different to him. As it should for one of South Africa’s richest celebrities who has an estimated net worth of $5 million according to Buzz South Africa which equates to R71 million.