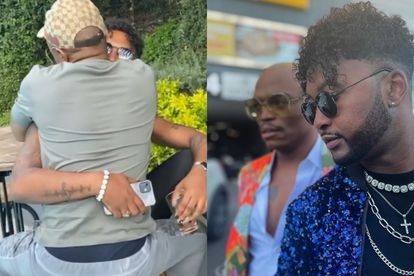 South African media personality Somizi Mhlongo posed naked in front of his “bestie” singer Vusi Nova to take a snap of him while in Camps Bay, on the latest episode of his reality show which aired on Showmax on Wednesday 8 June.

Somizi Mhlongo stripped butt-naked while in Camps Bay and asked his “bestie” Vusi Nova to take a picture of the back of his body – as seen on the latest episode of his reality show.

“I think the sooner we realise that we have one body and it’s not somebodys, it’s your body. Regardless of the shape, the height, the girth, the width, the length… this body happens once,” said Somgaga.

“I have such a cute bum, hey?” he continued.

“Vusi, hurry up. The neighbours are watching,” he said.

“I don’t care about the neighbours,”replied Vusi.

ALSO READ: ‘I utilised the place’: Somizi on having ‘great sex’ in Cape Town

“Somizi said you only get this body once- love it and celebrate it,” tweeted @itspeopleforme.

“Somizi’s energy stands out for me man! The way he comfortably took off his clothes and requested Vusi for a picture shows how comfortable he is in his body. One body, shape, size , it’s yours, embrace it! ????,” tweeted @YolandaKarabo.