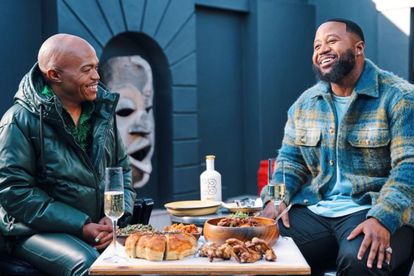 Somizi Mhlongo on ‘the Braai Show with Cassper Nyovest’. Image via Twitter @casspernyovest.

Somizi Mhlongo on ‘the Braai Show with Cassper Nyovest’. Image via Twitter @casspernyovest.

Media personality Somizi Mhlongo spoke out about his estranged husband Mohale Motaung for the first time since the abuse allegations, in an episode of The Braai Show With Cassper Nyovest on Wednesday 10 November.

SOMIZI: ‘HE’S DEPARTED FROM THIS EARTH’

Somizi Mhlongo was the special guest on this week’s episode of The Braai Show With Cassper Nyovest. When the episode aired on SABC 1 both Somizi and #TheBraaiShowWithCass began to trend on Twitter.

This is because of Somizi’s reply when Cassper asked him about Mohale. The former Idols SA judge implied his estranged husband is dead to him.

“Love that @casspernyovest brought (up) the Mohale thingy and they laughed about it @somizi is a legend #TheBraaiShowWithCass,” wrote @Cmbulele_Mag.

SOMIZI VS MOHALE: ALL THE DRAMA

The pair seemed to be experiencing trouble in paradise since the end of 2020, when fans noticed the media personality spent his birthday with Vusi Nova and not his husband. Somhale brushed it off as being a challenge of their first year of marriage.

The current “state of Somhale” is approaching divorce. Both Somizi and Mohale confirmed that they would be getting divorced in August this year. This followed the abuse allegations Mohale made against the former Metro FM host.

“I took my keys and walked out, he took a knife. I was about to exit, so he said to me, ‘if you exit… I’m going to kill us both.’ So I took my keys and ran. He grabbed the knife and said ‘if you walk out, I’m going to stab you’. Now I see a different person. I was s*** scared and walked back into the house. He said ‘let’s talk.’ He cried and we moved on,” said Mohale in audio clips that were leaked.

On the Braai Show With Cassper Nyovest Somizi said the abuse allegations had greatly impacted on his career.

This is because he lost his seat on the judging panel of Idols SA and his radio gig on Metro FM following the abuse allegations. He was also banned from Zimbabwe on 4 November due to his sexual orientation.

WHAT IS MOHALE UP TO THESE DAYS?

Somizi has been suffering in style while Mohale has been living his best soft life. In a video posted to Instagram on Wednesday 10 November, Mohale teaches his followers about “na enjoyment”. In the video, Moahle is seen seated in a merlot bath snacking on cheese, biltong, grapes and sipping on wine.

The Rockville star seems to be unbothered about his estranged husband.