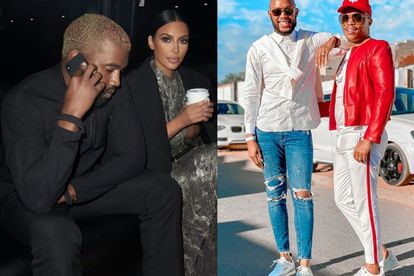 The biggest breakups of 2021 include Somhale and Kimye. Images via Instagram @somizi @kimkardashian.

The biggest breakups of 2021 include Somhale and Kimye. Images via Instagram @somizi @kimkardashian.

Here is a look at the celebrity couple who called it quits this year.

Producer and composer Lebo M decided to go their separate ways in April this year after a third attempt at making their relationship work.

“We had hoped that the third attempt would have been the final one in both our lives. We have tried hard, and we are proud of our efforts. Regrettably, we simply did not connect,” said the couple in a joint statement.

Sunday World later reported that Lebo M will be walking down the aisle for the eight time with businesswoman Pretty Samuels.

Somizi Mhlongo and Mohale Motaung shocked their fans and followers in August this year. Mohale accused Somizi of physically and psychologically abusing him in leaked audio clips. This led to the couple’s big breakup which many saw coming but did not know the extent of the issues the former couple shared.

The abuse allegations took a toll on Somizi’s career as he had to take “time off” from his radio gig on Metro FM and his judge role on Idols SA.

Mohale revealed that he and Somizi will be getting divorced and the former Idols SA judge also confirmed the divorce.

Actress Sophie Ndaba and Max Lichaba went their separate ways in March 2020 but their breakup was only revealed in April this year. The couple reportedly split due to Max’s alleged cheating.

Kim Kardashian filed for divorce from Kanye West in February this year, after seven years of marriage. The pair have four children together – North (8), Saint (6), Chicago (3) and Saint (2).

Following the split Kanye reportedly went on a birthday baecation with model Irina Shayk. He was also rumoured to be in a relationship with 22-year-old model Vinetria. Both flings did not seem to work out and Kanye wants Kim back but it seems the reality star moved on with comedian Pete Davidson.

LATEST ON THE BREAKUP

Kim filed to be legally single while Kanye bought a house across the road from her.

Jennifer Lopez and Alex Rodriguez officially called off their engagement in April this year.

“We have realized we are better as friends and look forward to remaining. So, we will continue to work together and support each other on our shared businesses and projects. We wish the best for each other and one another’s children. Out of respect for them, the only other comment we have is to say thank you to everyone who has sent kind words and support,” said the pair in a joint statement.

ALSO READ: ‘The queen is pregnant’: Baby No 2 for Grimes and Elon Musk?