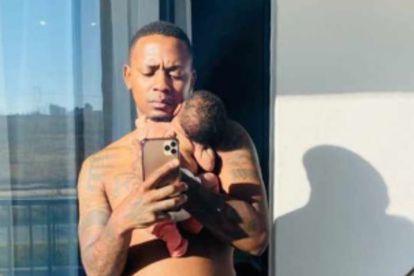 It appears entertainment blogger Musa Khawula may have been wrong about The Queen actor Pholoso Mohlala being Somizi Mhlongo’s fiancé as he welcomes a newborn baby with his ‘girlfriend’.

The former Isidingo and The Queen actor Pholoso Mohlala, who was rumoured to be engaged to reality TV star Somizi Mhlongo back in April announced his newborn baby on his Instagram account.

Mohlala’s followers also congratulated him when he shared a picture of his pregnant baby mama on 1 July.

One of his followers commented:

@Lona_nombila: ‘Congratulations buddy’ to which he replied ‘Thanks aunt’ when he posted his highly pregnant baby mama.

WHO IS SOMIZI’S NEW MAN?

Friends of Mohlala also rubbished entertainment blogger Musa Khawula’s reports back in April when he announced that the actor Pholoso Mohlala is Somizi Mhlongo’s fiancé.

Mohlala’s friends revealed on Khawula’s post that the former Rhythm City actor has a girlfriend who is pregnant with his girlfriend and that he’s not engaged to the Idols SA judge Somizi Motaung.

Rumours of Mohlala and Mhlongo being engaged began when the Idols SA judge teased his possible engagement on his Instagram Story back in April and also hinted his engagement in the trailer of his reality show Living The Dream With Somizi.

But in a twist of events, Mhlongo revealed on his reality TV show this week, 7 July that he is getting married to himself as he’s redesigned his wedding ring and asked his friend Vusi Nova to pop the question.

“My biggest highlight for this season is that I am getting married again.”

The choreographer also announces on his reality TV show that he’s dating someone new after his divorce from radio personality Mohale Motaung.