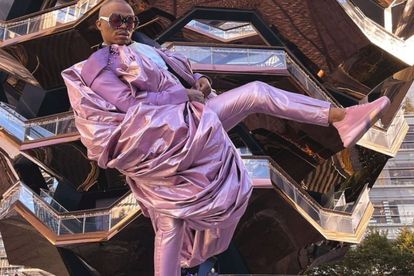 Media personality Somizi Mhlongo ditched Twitter again on 23 November after being back on the app for just a day.

After taking a Twitter hiatus since October, Somizi Mhlongo returned to the micro-blogging platform for a day. He posted snaps from his vacation in New York where he flew first class.

Tweeps began to leave nasty comments on his photos.

“I hope you don’t mention that you are from South Africa when they ask. What are you wearing? We drip here,” wrote @IsaacNewton_PRS.

“What are you wearing now?” asked @k_midlands.

Somizi quickly gave up on Twitter, within the day because he felt Tweeps were “toxic”. He also questioned whether he was not strong enough to handle the comments and dragging.

“Wooo hayi it’s been peaceful without this app. I guess im either not strong or some people here are (just) toxic as f***. To (those) that are kind you know where to find me. I love you but I’m too blessed for the toxicity (here),” wrote Somizi.

Somizi kept a low profile on Twitter after his estranged husband Mohale Motaung accused him of physical and psychological abuse. Tweeps cancelled the media personality so he lost his seat on the judging panel of Idols SA and his gig on Metro FM.

“I took my keys and walked out, he took a knife. I was about to exit, so he said to me, ‘if you exit… I’m going to kill us both.’ So I took my keys and ran. He grabbed the knife and said ‘if you walk out, I’m going to stab you.’ Now I see a different person. I was sh*t scared and walked back into the house. He said ‘let’s talk.’ He cried and we moved on,” said Mohale in leaked audio clips.

The former Idols SA judge was also banned from Zimbabwe on 4 November. Somizi has had a tough few months with the loss of work but he continues to maintain his soft life with several vacations, workcations and “bestiecations.”