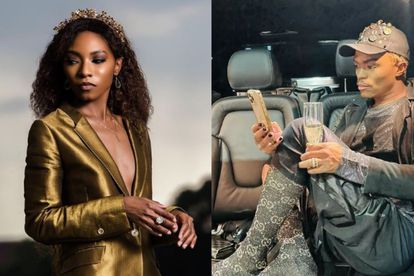 South African media personality Somizi Mhlongo finally sat down with his daughter Bahumi to talk about her surname change on the latest episode of his reality show which aired on Wednesday 22 June.

Somizi Mhlongo has a 26-year-old daughter named Bahumi with actress Palesa Madisakwane. Palesa previously revealed that Somizi did not pay damages for Bahumi. So, Bahumi took on her surname and “her uncles are like fathers to her.”

Bahumi expressed that she wants to change her surname but no do it customarily on the latest episode of Living the Dream With Somizi on Wednesday 22 June.

“I don’t believe in engaging with my ancestors. I’ve always respected it and whenever there’s a ceremony, I’m there to help. I do it because I honour you and respect your culture. It’s not something I necessarily believe in,” she said.

“We believe in different things and in this sense it’s about me, I want to do things my way.  I know you and my mother want me to do things customarily, but I don’t want to,” she said on the show,” she continued.

This comes after Palesa told Bahumi that she needed to follow tradition in order to change her surname.

SOMIZI: ‘ANCESTORS WILL BE ANGRY AT ME’

The Idols SA judge explained to his daughter that her surname can only be changed after the ancestors are consulted or else they will be angry with him.

“You don’t just change a surname… we need to talk to the ancestors so you can be formally introduced and welcomed. We’ll have to find common ground where we can both be comfortable,” he said.

“I obviously want to change your surname, but it’s not going to be on your terms. Ancestors will be angry at me. They’ll ask me why I never consulted with them. So I’ll have to consult with them on your behalf,” he continued.