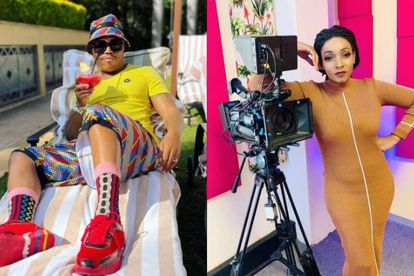 PALESA: ‘YOU DISRESPECTED MY WOMB’

Palesa Madisakane has 26-year-old Bahumi with Somizi Mhlongo. She previously revealed that he did not pay damages for Bahumi. So, Bahumi was given her mom’s surname.

In a preview for the next episode, Palesa tells Somizi he disrespected her womb. Although it is unclear what happened between the pair, it is likely to be about Bahumi’s surname. This is because Palesa questions why Somizi has not done what he was supposed to as yet.

“I should have completed everything by now,” he says

“But why didn’t you finish doing everything,” she asks.

“I don’t have the time, which is wrong,” he responded.

“Now I’m asking myself… whether Somizi is serious. He has to be clear on whether he’s in or out whether he’s going forward or in reverse, he shouldn’t tell me tales,” she responded.

“This person is not only disrespecting my family but I felt like you disrespected my womb,” she continued.

Somizi went on to say that he does not like serious conversations.

The conversation is likely to be in relation to Bahumi wanting to change her surname. She wants to take on Somizi’s surname – Mhlongo but Palesa’s family said that the proper traditional procedures need to happen first.

“If she wants to change her surname to Mhlongo, she is an Mhlongo at the end of the day. There is nothing I can do, but I am just worried (about) what my dad will say. My father always says that there are steps that need to be taken,” said Palesa on a previous episode.

“It’s not about money, it’s just about certain things to be corrected so that we can give her our blessings,” she continued.

She added that Bahumi’s uncles are like fathers to her.