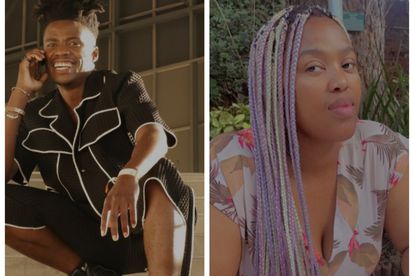 Smash Afrika is accused of cheating on his wife with singer Msaki. Image via @sashafrika, @msaki_za/Instagram

Smash Afrika is accused of cheating on his wife with singer Msaki. Image via @sashafrika, @msaki_za/Instagram

According to Sunday World, a source revealed that the Massive Music presenter’s marriage started crumbling three months into their traditional wedding which took place in 2020.

Their marriage has taken such a bitter turn that Kefiloe allegedly smashed Smash Afrika’s sister’s car and the presenter’s bedroom window in an incident that took place when she had gone back to their matrimonial home to collect her clothes.

The source told the publication that Smash Afrika was allegedly psychologically abusive towards his wife, Kefiloe — the daughter of actress Rami Chuene.

Among some of the things, the 5FM radio host is accused of labelling his wife a “gold digger” and claiming her family tricked him into marrying her.

“She told us he started throwing tantrums, telling her she was useless, and a gold digger and she and her family had conned him into marrying her,” said the source who is a relative.

Kefiloe reportedly also moved out of their matrimonial home when she was pregnant and moved in with her mother, Rami.

In addition to the psychological abuse, Smash Afrika is also accused of cheating on his wife with Msaki as his wife reportedly found pictures of them kissing, as well as a love letter from the Ubomi Abumanga singer.

The publication claims to have seen the alleged love letter.

“The box represents a commitment to loving you ravishngly and holding communication, honesty, transparency in high regard between us. As you know, I shut down in my previous relationship. I want you to know that I tend to fill this box, reflections, questions, offerings about us/ you/ me,” reads the letter.

When confronted about the affair, Smash Afrika allegedly did not deny it and instead told his wife that Msaki, unlike her, is his peace.

However, the outlet reported that Smash Afrika has also sent messages to his wife, in which he apologised for “abusing, manipulating and hurting” her.

In another text, he allegedly wrote: “I did use my dirty mouth to block you out and I regret that and sorry for using silent treatment as a tool. Sorry for stealing your joy through my selfish and childish tantrums.”

Msaki and Smash Afrika had not responded to questions The South African website sent when this article was published.

Kefiloe said that there’s a protection order preventing her from talking to the media.