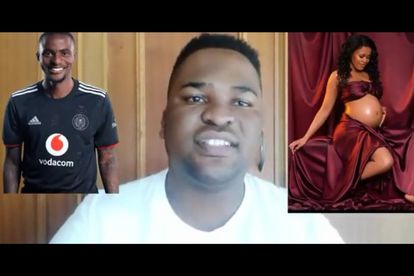 Natasha Thahane pleasantly surprised most fans with the announcement of her pregnancy… but Slik Talk? Not so much. The Blood & Water actress shared a photo of her glowing baby bump on Instagram and fans are assuming her on-and-off boyfriend Thembinkosi Lorch is the father.

The pair have had their ups and downs since they were first spotted on baecation in Zanzibar In June 2021. Both Natasha and Lorch have added and removed pictures of each other on Instagram. So, there is no clarity on whether Lorch is in fact the “baby daddy” or not.

SLIK TALK: ‘THIS IS THE WORST MISTAKE YOU’VE EVER MADE IN YOUR LIFE’

Slik Talk did not hold back when he slammed the actress and footballer. He said that Natasha’s pregnancy is one of the worst mistakes she had made because Lorch is a liability and embarrassment.

“This is one of the worst mistakes you’ve ever made in your life, you don’t beg on a guy like Lorch. He is a complete liability , a fraud and overhyped media darling. He will disappoint you every time,” he said.

Slik Talk went on to say that Natasha can no longer play the role of Wendy Dlamini on Netflix’s Blood & Water. He says this is because she is a mother now.

‘The ocean needs us’: Aquaman star says ‘save the oceans’