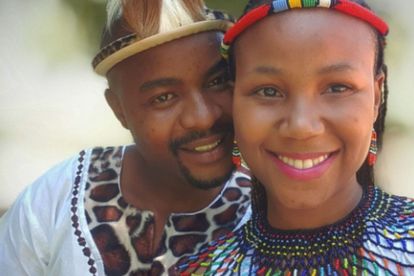 Sports personality and actress Amanda Manku – who plays the role of Dr Elizabeth Thobakgale on Skeem Saam just got married.

The actress shared her traditional wedding pictures on her Instagram story yesterday (4 January).

AMANDA MANKU IS OFF THE MARKET

Seasoned actress Amanda Manku – who plays the role of Dr Elizabeth Thobakgale on Skeem Saam is the sixth star after Nozi Langa, Pebetsi Matlaila, Innocent Sadiki, Cornet Mamabolo, and Clement Maosa from the show to tie the knot.

The actress took to her Instagram story yesterday morning (4 January) to share images of her traditional wedding.

She asks that everyone refer to her as ‘Mme Mtau’ from now on.

“Can’t wait to share the pictures with you guys. Oh, don’t forget to refer to me as Mme Mtau.”

Manku, who is private about her love life first shared an image of herself and her husband dressed in their traditional outfits on her Instagram feed last month (22 December).

“I’ll say it again, I was first in line when God was dishing out good men.”

It is unclear who her mystery husband is at this stage as she’s still keeping his identity a secret.

Congratulatory messages from her industry friends such as Nozi Langa, Lerato Marabe, and Clement Maosa have been pouring in for the actress.

THE ACTRESS IS IN MOURNING

Amanda Manku also had a heart-breaking 2021 as she lost both her mother and grandmother at the same time in May.

She announced on her social media accounts that she had lost her parents but did not go into further details.

Manku described 2021 as the most difficult year of her life.

“This is by far the worst and most difficult year of my life,” she said. “As it comes to an end, strength to all those who lost loved ones this year.”

OTHER ‘SKEEM SAAM’ ACTORS THAT GOT HITCHED

Langa and Malao revealed they’re married by sharing their wedding pictures on their Instagram accounts.

Reality star and actress Innocent Sadiki – who plays the role of Sthoko Seakamela on the soapie also revealed on her Instagram account in October 2020 that she and her pastor husband – Phendulo Sadiki were celebrating 10 years of marriage.

Her character – Dr Elizabeth Thobakgale and Kwaito Maputla are lovers on the educational soapie.

Maosa’s on-screen half-brother Cornet Mamabolo – who plays the role of Tbose Maputla also got married in 2019.

Radio personality and actress Pebetsi Matlaila – who plays the role of Mokgadi Matlogo – on the educational soapie also got married in November 2020 to TV producer, Lloyd Mbatha.