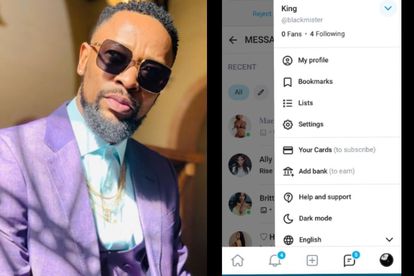 South African actor Sthembiso Khoza, popularly known as SK Khoza, confirmed that he has an OnlyFans account after his sex tape went viral on Wednesday 6 July.

This comes after the actor’s sex tape went viral on Twitter. A video of the actor giving a woman oral sex has gone viral on the platform and viewed a total of 175 000 times. The identity of the woman is still unknown.

Some Tweeps thought that the actor’s OnlyFans account was a good idea. This was because the Tweep thought he could make more money on OnlyFans than he does with acting.

“SK Khoza should just open an OnlyFans account. I swear he will make more money than he does acting,” wrote @MLetswele.

Others agreed! Take a look…

Other Tweeps joked about the lighting in the actor’s videos.

“For SK Khoza to get good lighting for his onlyfans, any production company willing to work with him on this one❓,” wrote @_LeratoMabuza.