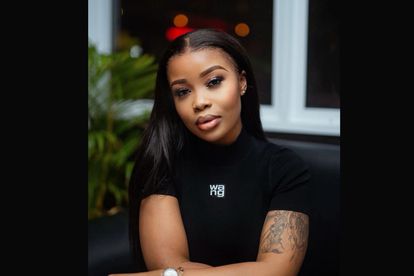 Musa Khawula alleged that influencer and DJ Sithelo Shozi’s booking fee is R25 000. This amount excludes flights and accommodation which is needed for three people. So Tweeps were in shock.

“Booking Sithelo Shozi to perform at your event costs R25 000 according to her manager. The booking fee does not include flights and accommodation for 3 people,” wrote @khawula_musa on Twitter.

Tweeps were shocked at the amount. Take a look…

Others questioned what she does and what she would be performing because they were not familiar with her work.

Another Tweep mentioned that she “lost her bag”. This is because she was believed to be dating Andile Mpisane, the father of her children. The Royal AM chairperson is known for his flashy life, expensive cars and lavish clothing. So, Tweeps believed she was well taken care of financially.

Andile shocked Mzansi when he announced his marriage to Tamia Louw because most people believed he was in a relationship with Sithelo. Sithelo and Andile were together for a few years and share two children together but he married Tamia. His mom, Shauwn “MaMkhize” Mkhize confirmed their break up when she mentioned the pair were co-parenting.

“I accepted the mother of my grandchildren with all her flaws ,whilst the whole world was blaming me but because I fully understand that nobody is perfect,” wrote MaMhize on Instagram.

“Out of respect for all parties involved I will not be going into the details of their private affairs. They have both moved on with their lives and will continue co-parenting for the sake of the children,” she continued.