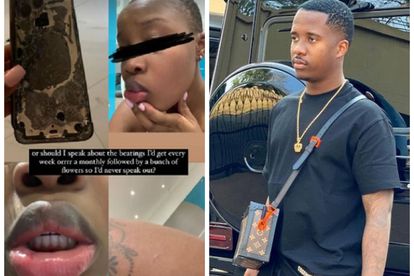 DJ Sithelo Shozi has accused Royal AM chair Andile Mpisane of physically, emotionally and verbally abusing her during their relationship. Image via Instagram @_sithelo/
@andilempisane10

DJ Sithelo Shozi has accused Royal AM chair Andile Mpisane of physically, emotionally and verbally abusing her during their relationship. Image via Instagram @_sithelo/
@andilempisane10

Model, singer and DJ Sithelo Shozi has shared shocking images and clips relating to allegations that her ex-boyfriend and baby daddy Andile Mpisane physically and verbally abused her.

The DJ took to her Instagram Stories on Tuesday evening to shed some light on what transpired during her high-profile romance with the Royal AM chairperson and businesswoman Shauwn “MaMkhize” Mkhize’s son.

In an Instagram Q&A, Sithelo Shozi answered burning questions about her life and past relationship. When asked what she had learned from her relationship with Andile Mpisane, Sithelo shared “plenty”.

She then posted a clip of a man — allegedly Andile — verbally abusing her.

The man is heard saying: “You will never be anything”.

Sithelo also shared a screenshot of threatening messages, which she claims are from Mpisane.

One message reads: “I will find you”.

Sithelo captioned the image: “Let me sit here and answer your questions, whilst my “hit” is being organised.”

In another slide, Sithelo shared the following: “I’m not one to speak about anything concerning my private life, especially where my kids are involved. But everyone has a breaking point and this narrative has gone too far. I’ve been silent for far too long and hid my truth for the sake of peace. But today I will not be silenced”.

In another Instagram Story, Sithelo shared pics of her bruised and beaten face.

“Let’s start with when I was beaten into a pulp and had a miscarriage at the hands of my so-called “victim” in a room full of his family and friends. Rushed to the nearest hospital and treated like nothing ever happened.”

In another, Sithelo wrote: “Or should I speak about the beatings I’d get every week or monthly followed by a bunch of flowers so I would never speak up”.

Sithelo then posted a screenshot of a medical document which revealed she had sought help from a psychologist.

“Are we going to talk about how I had to be the one seeking psychological help for you. Because of how tired I was of the continuous abuse.

“Nobody around you can ever reprimand your reckless behaviour.”