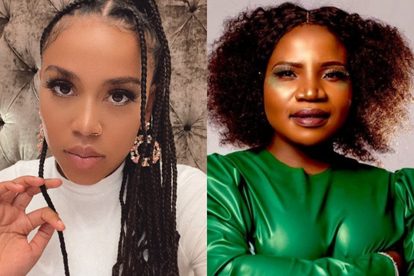 South African musicians Sho Madjozi and Makhadzi are trending this morning after Makhadzi celebrated getting 300k views in less than 24 hours.

In the midst of congratulatory messages, some tweeps started comparing Madjozi to Makhadzi who is also from Limpopo. Many are of the opinion that Madjozi has “light-skin privilege”.

South African Limpopo-born artist Makhadzi headed to Twitter on Monday this week to celebrate her new song, Ghanama, getting 300k views on YouTube in less than 24 hours.

“Thanks for 300k views in less than 24 hours,” she captioned a screenshot of the achievement on her timeline.

The post received more than 1000 likes as many of her doting fans headed to the comment section where they shared many congratulatory and supportive messages.

Not long after Makhadzi started trending for her amazing achievement, fellow Limpopo-born South African musician, Sho Madjozi, started trending. It all started when one local Twitter user tweeted that Madjozi was doing better in the music industry than Makhadzi because she is light-skinned.

“Convinced Sh* M*djozi did so well in such a short space of time because she was light-skinned. This lady makes good music, works hard & is a star but we know why she’s so overlooked,” wrote @NalediSekoto who was comparing Madjozi to Makhadzi.

Tweeps get all riled up in a Makhadzi & Madjozi debate

“Lightskin people be so pressed when we talk about colourism yes Sho Madjozi is talented and also Makhadzi but Makhadzi is overlooked because of colourism both by the industry and people.”

“Then why the likes of Thuso Mbedu are even bigger than Sho Madjozi if colour is a thing?”

“At this point, y’all just have a problem with light-skinned people, cause this is projecting. Y’all go straight to colourism, have you considered that maybe her PR team is the problem?”