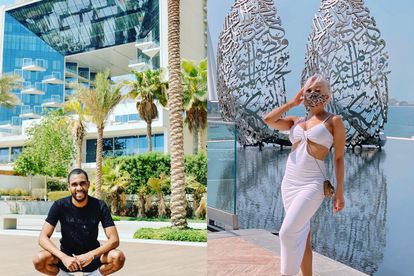 Khanyi Mbau is leveraging her “great Dubai escape” from her boyfriend Kudzai Mushonga with what looks like an amapiano hit in the making. Over an Instagram live, Khanyi Mbau showed her 2.8 million followers that she was in the studio with amapiano star Sir Trill. The pair seemed to have been having a recording session.

The words of the song reference how Khanyi Mbau left her millionaire boyfriend high and dry in Dubai. However, she hints that she will return.

When translated to English this means leave as if you’re coming back, leave the man in Dubai. This follows the Red Room star trending on Twitter on Sunday 12 September following her performance of the song at a groove which had tongues wagging.

While many are in awe of Khanyi’s bold way of turning her drama into money, others weren’t in favour of how she was mocking Kudzai Mushonga.

“Dubai,” wrote Mbau in the caption of the video she shared to Instagram TV.

Towards the end of August, Khanyi Mbau went to visit a salon while on vacation with her boyfriend in Dubai. However, she never returned from the salon which left the businessman questioning if she had gone missing. He anxiously took to social media in the early hours of the morning on Monday 30 August letting his followers know that he is frantically looking for his girlfriend. This sent South Africans into a state of panic, thinking Khanyi had actually gone missing.

Khanyi Mbau made her boyfriend sweat for about two weeks before letting him know that she will return to him, from the salon.

This was just after the businessman posted a picture of his new red Lamborghini. Coincidence?