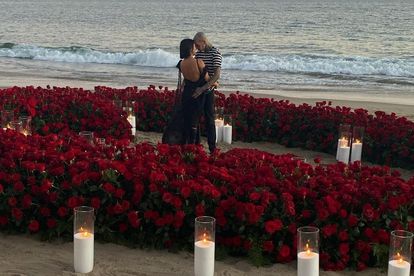 Kourtney and Travis are engaged. Image via Instagram @kourtneykardash.

Kourtney and Travis are engaged. Image via Instagram @kourtneykardash.

Travis went all out with thousands of roses set up to form a huge heart, surrounded by candles on the beach! The Keeping Up With The Kardashians star shared photos of the special moment on Instagram.

Travis shared a close up snap of the ring on his Instagram story.

Kourtney’s sister Kim Kardashian confirmed the news by tweeting a video of the pair’s infamous, excessive public display of affection. The video showed off Kourtney’s ring.

According to inside sources the Poosh founder’s other sister Khloe Kardashian and the father of her child, Tristan Thompson were present.

“Kourtney looked very surprised to see Khloe and Tristan there,” the insider shares. “Travis escorted Kourtney down to the beach, where he had red and white florals set up in the shape of a heart,” said a source to E News.

“It looked very romantic. I could see Kourtney smiling from ear to ear and put her hand over her mouth looking surprised. The family cheered for them and went back into the hotel,” the source continued.

Another source told the publication that Kim, their mom Kris Jenner and her boyfriend Corey Gamble also witnessed the proposal. They later surprised the couple at the hotel and had a private celebration.

The pair previously sparked rumours of an engagement back in July while on a trip to Las Vegas. Travis’s daughter Alabama Barker posted a photo of the couple with the caption “so happy for you guys,” which led many to believe they had gotten married, or at least engaged.

However, that was mere speculation and the pair are now officially to be married. This would be the reality star’s first marriage, while the rockstar has been married twice before — Melissa Kennedy (2001- 2002) and Shanna Moakler (2004- 2008).

ALSO READ: ‘Anything is possible’: Travis Barker thanks Kourtney for helping him overcome fear of flying