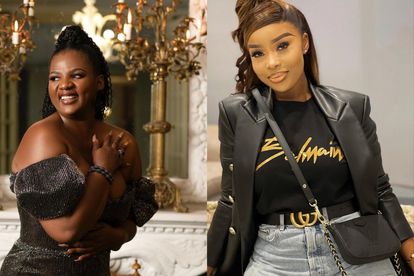 Twitter users were amused at businesswoman and Royal AM owner Shauwn “MaMkhize” Makhize saying she accepts her son’s “baby mama”, with “all her flaws”, via a personal statement on Monday 20 December.

MaMkhize felt compelled to address the rumours surrounding her son Andile Mpisane’s marriage. Andile shocked Mzansi when he announced his marriage to Tamia Louw because he was believe to be in a relationship with the mother of his children – Sithelo Shozi.

Tweeps thought Andile’s marriage was arranged by his mother so she took to Instagram to clear up these rumours. The Royal AM owner also addressed her alleged beef with Sithelo.

“I personally have no grudges or any untoward feelings against the mother of my grandkids. She’s given me two beautiful grandchildren which binds us forever and I will always consider her to be like a daughter to me,” she wrote.

“Nobody has been kicked out of any apartment nor have any kids been taken away from anybody. I remain committed to ensuring that my grandchildren grow up experiencing love from all sides and that they are well taken care of,” she continued.

“I accepted the mother of my grandchildren with all her flaws ,whilst the whole world was blaming me but because I fully understand that nobody is perfect. Out of respect for all parties involved I will not be going into the details of their private affairs. They have both moved on with their lives and will continue co-parenting for the sake of the children,” she added.

TWEEPS: ‘WITH ALL HER FLAWS’

Tweeps were amused by MaMkhize mentioning Sithelo is flawed in her statement. Take a look…

“People acting shocked at Mamkhize saying she accepted that one with all her flaws. Firstly – predator. Secondly – look at what she did to Uyathandeka. That’s just the things we know of,” wrote @SandaMkent_.

ALSO READ: ‘Book her to do what!?’: Sithelo Shozi’s R25k booking fee causes a stir