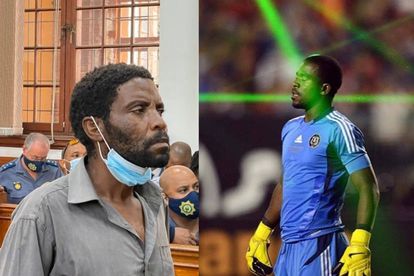 Mafe is accused of starting the fire which completely gutted the buildings in the parliamentary precinct in Cape Town. The 49-year-old appeared in the Cape Town Magistrate’s Court (4 January) and he does not intend on pleading guilty to all of the charges.

Twitter users seem to believe that the government was merely “picking a homeless guy” to use as a scapegoat for the fire.

Tweeps were quick to start comparing the case of Mafe to that of Senzo. The late Bafana Bafana captain and was killed in an armed robbery.

The robbery took place at the Vosloorus home of his “baby mama”, singer Kelly Khumalo’s mother, on 26 October 2014.

Notorious hitman Fisokuhle Ntuli was implicated in the murder case in October 2021.

However, tweeps do not believe a hitman had a motive to kill Meyiwa. And now word on the Twitter streets is that tweeps find it hard to believe that Mafe set fire to the parliamentary buildings.

Twitter users compare Mafe’s case to the former Bafana Bafana captain which made the pair trend on the social media platform.

“Once upon a time they expected us to believe that Qalakabusha inmates had killed Senzo Meyiwa. Picking a homeless guy doesn’t seem too far fetched,” wrote @seempeeway.

“The very same state that wrongfully arrested a person for killing Senzo Meyiwa. You want us to believe that they have the right man in this case. That is nonsense,” wrote @SiphoMadyo.

“Very much like those who were brought into court to face the murder charges of Senzo Meyiwa. When they knew nothing about what they were testifying for on the day of appeal,” wrote @iMash_D.

“Let’s hope the real suspect will come forward and confess. We don’t need a similar drama to that of Senzo meyiwa case,” wrote @Nemiah36220848.