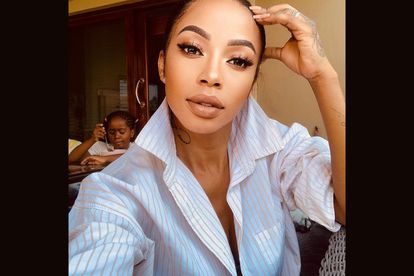 South African singer Kelly Khumalo has hired an attorney to conduct a watching brief at the trial of the five men accused of murdering her ex-boyfriend and father of her child, former Bafana Bafana captain Senzo Meyiwa, which was set to take place on Monday 11 April, but had been delayed for 24 hours.

Kelly Khumalo’s attorney, Magdalene Moonsamy, was present at the trial which was set to start in the Gauteng High Court in Pretoria on Monday 11 April.

Moonsamy was one of three lawyers who placed themselves on record before Judge Tshifhiwa Maumela, according to News 24.

Senzo was said to have been killed in an armed robbery at Kelly’s home in Vosloorus on 26 October 2014. Kelly was one of the six people at the house when the alleged robbery took place. So, who else was in the house?

So, Kelly is considered to be one of the witnesses in the case. Moonsamy is in court to protect Kelly’s rights and best interests.

“The most important thing is to get to a final conclusion and closure for the nation and the world,” said Moonsamy to the publication.

What exactly is a watching brief?

According to Wikipedia, a “watching brief” is a method normally used in criminal cases by lawyers to represent clients not directly a party to the suit and to function as an observer.

The method is normally used to help protect the rights and interests of victims of a crime, or also to protect a defendant from possible malicious prosecution.

WHAT IS THE LATEST ON THE CASE?

The latest on the case is that that AfriForum’s legal head, Advocate Gerrie Nel said that police now know who the “mastermind” behind the murder is. This revelation was made at the Pretoria High Court on Monday 11 April.

The case was delayed for 24 hours after advocate Zandile Mshololo, representing Ntuli, told the court that they were not ready to proceed. This was because they had only received some of the particulars of the case two weeks ago.

The men face five counts that include murder, attempted murder, robbery with aggravating circumstances, possession of a firearm, and possession of ammunition. The developments come just days after a documentary on the former Bafana Bafana captain’s death was released on Netflix titled Senzo: Murder of a Soccer Star on 7 April.