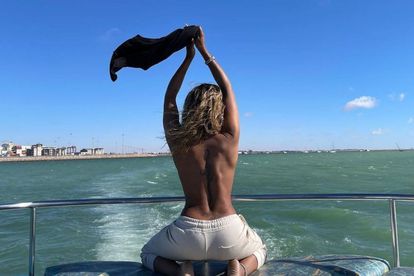 Radio personality Dineo Ranaka shared a video of herself dancing topless on a yacht in Namibia on Instagram today (29 December).

Dineo Ranaka is living her best life. The radio personality made headlines last week for her angry rant but she is unbothered and dancing on a yacht in Namibia. Dineo shared a video of herself topless and dancing to Drake’s Can I.

Dineo appears to have been in Namibia for the last two days according to her Instagram. Take a look…

“Thank you soooooo much Namibia 🥰🥺🤍. The MOST liberating experience EVER! It was here where I was reminded once again that people’s opinions hold no water. I came back to myself. Stepped deeper into my way of being. So empowering 🌊 I feel like my soul is nourished, my spirit is free and my mind is at ease. A N X I E T Y is fully under control! 🤍🙏🏽 📷,” she wrote.

Dineo topped the Twitter trends list on 21 December when a video of her angry rant with ex-boyfriend Sechaba Thole went viral. The Metro FM host was slammed for “verbal abuse” as she told Sechaba she used him to heal while she was going through a divorce.