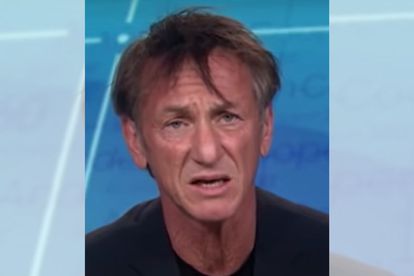 For the first time after his escape from Ukraine, actor Sean Penn shared his experience on CNN. Image via YouTube screenshot
CNN

For the first time after his escape from Ukraine, actor Sean Penn shared his experience on CNN. Image via YouTube screenshot
CNN

Veteran actor and director Sean Penn has made his first public appearance since fleeing Ukraine last week on foot amid the Russian invasion of the country.

Speaking in an interview with CNN, the Hollywood actor and activist detailed his trip to the war-torn country. The screen veteran was in the capital city of Kyiv to film a documentary about the Russian invasion and conflict. The star and his production team fled on foot to the Polish border alongside thousands of women and children on 2 March.

But the 61-year-old star claims his first-hand experience was one he was “glad to have had”.

Speaking to Anderson Cooper, Sean Penn opened up about his meeting with Ukrainian President Volodymyr Zelensky, whom he called a “great figure in history”.

He said: “Meeting with President Zelensky the day before the invasion and then meeting with him again on the day of the invasion, I don’t know if he knew he was born for this, but it was clear that I was in the presence of something … that was new to the modern world in terms of courage and dignity and love.

“This is an extraordinary moment. I was impressed and moved by him and terrified for him and for Ukraine.”

Sean Penn also claimed that citizens of the country have mirrored the traits of their leader.

He added: “When I talk about President Zelensky, it should be said that most of what I observed in Ukrainian people [also]”.

Sean Penn also revealed the “heartbreak” he witnessed fleeing the country on foot to the Polish border.

The actor and his documentary crew abandoned their rental vehicle on the side of the road during their escape. The star claimed he was joined by mostly women and children as men between the ages of 18 to 60 were told to stay as part of the resistance against Russia.

He continued: “I didn’t see any luggage. It was as though they wanted to believe they’re going to be able to come back. There was an immediacy to leave because of the incredible amount of people leaving and how long it takes to get out of the country now”.

Penn calls for support of Ukraine

Sean Penn – who revealed he has travelled in many countries in conflict – admitted he was “glad” to experience what it was like on the ground.

“I was glad, not so much in the moment, but I was glad to have had the experience of having to see what it was to get through that border. What it is to just sit there for sometimes days.

Sean Penn also called on others to show their support to the people of Ukraine, and it’s president.

“This is ominous because it is so heartbreaking in the ripple effects it is going to have around the world, where this incredible symbol of democracy – a belief in free dreaming is being assaulted.

“They’re fighting for their lives…I don’t know the answers, I don’t know if no-fly zones are going to create a nuclear war. I do know that we have to invest everything we have to support the Ukrainian people and President Zelensky, or I do not think we will have a legitimate memory of what America hopes to be”.