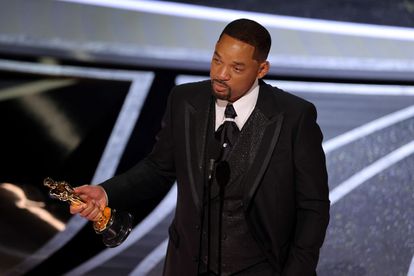 The Screen Actors Guild (SAG) slammed Will Smith’s slap involving Chris Rock at the Oscars 2022 and vowed to take action against the King Richard star via a statement on Monday 28 March.

Will Smith had tongues wagging across the globe after he slapped Chris Rock on stage during the Oscars on Sunday 27 March. The King Richard star, who won an Oscar for Best Actor in a Leading Role – slapped Rock because he made a joke about Jada Pinkett Smith.

Jada on the other hand appeared to look furious.. Will walked up on stage and slapped Rock and said “Keep my wife’s name out of your f**king mouth,” to Rock.

“Wow, Will Smith just smacked the s–t out of me” before defending what was “just a ‘G.I. Jane’ joke,” he continued.

The slap set tongues wagging on social media as everyone from celebrities to the public shared their thoughts on what transpired – but what about the Screen Actors Guild (SAG)?

Screen Actors Guild and the American Federation of Television and Radio Artists released a statement to address the incident. The statement said that such violence or physical abuse is inappropriate and unacceptable.

“As the union representing presenters and other performers working on the Oscars, SAG-AFTRA is focused on ensuring our members always work in a safe environment,” SAG-AFTRA wrote in a statement.

“Violence or physical abuse in the workplace is never appropriate and the union condemns any such conduct. The incident involving Will Smith and Chris Rock at last night’s Academy Awards was unacceptable,” the statement continued.

SAG-AFTRA also went on to say that they are working to ensure that the incident is appropriately addressed.

“We have been in contact with the Academy of Motion Picture Arts and Sciences and ABC about this incident and will work to ensure this behaviour is appropriately addressed,” the statement added.

This follows the Academy of Motion Picture Arts and Sciences opening a “formal review” into the attack. The Hollywood Reporter reports — the officers of the AMPAS’ board of governors — including bigwigs like President David Rubin and CEO Dawn Hudson — convened an emergency phone call to discuss the incident.