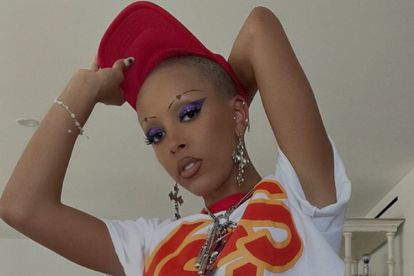 Doja Cat ‘reintroduces’ herself as ‘Oblong’ Dlamini. Image via @dojacat/Instagram

Doja Cat ‘reintroduces’ herself as ‘Oblong’ Dlamini. Image via @dojacat/Instagram

Singer and rapper Doja Cat has invited several South Africans to her mentions on Twitter after she “reintroduced” herself; seemingly embracing her Zulu surname, Dlamini.

The Say So hitmaker, who has previously been asked by South Africans — including amapiano musician, DJ Maphorisa — to come home, took to Twitter on Tuesday 30 August to introduce herself as “Oblong” Dlamini.

“Hey, how u doing my name is Oblong. Oblong Dlamini. yea have a nice day,” Doja Cat’s tweet read.

Now, if you follow the 26-year-old on Twitter, you’ll have quickly realised that sometimes her tweets can be a little confusing. So much so that last year there was a Twitter account called @Explaindojacat which did exactly what the username says – explain Doja Cat’s tweets for those that might be confused. But, sometimes, the account couldn’t decipher some of her tweets. Anyway, here goes…

Dlamini is Doja Cat’s father’s surname. She is the daughter of Dumisani Dlamini, a Durban-born actor who has had major roles in big productions such as Sarafina, Yizo Yizo and Isibaya.

On the other hand, Oblong is just a word to describe a figure or object that has a rectangular or elongated shape. It isn’t really clear if there is anything more to the Woman hitmaker calling herself this. Maybe it’s music-related. Fans would just have to wait and see.

Although a lot of Doja Cat’s fans seem to have been confused by her tweet, South Africans were happy about one thing… seeing her use her Zulu surname, Dlamini.

Tweeps showered the musician with love for embracing her surname, while others called for her to come back home. Others even went as far as saying her father should have an “imbeleko” ceremony for her, which is a traditional ceremony introducing the ancestors to a new member of the family.