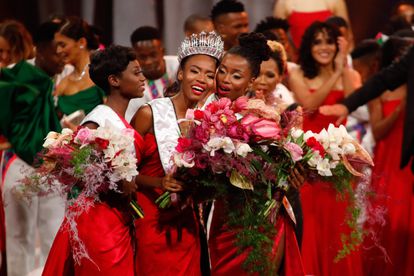 Former Miss Universe Iraq is speaking out against comments made by Nelson Mandela’s grandson, Inkosi Zwelivelile Mandla Mandela after he called for African countries to boycott the Miss Universe 2021 beauty pageant, which is set to take place in Israel in December.

Mandla Mandela calls for the boycott of the Miss Universe pageant

The South African previously reported that Mandela has called for an international boycott of the upcoming Miss Universe pageant, saying that apartheid Israel’s occupation is no less despicable than apartheid South Africa.

He also called on the country to boycott and withdraw all support for the Miss Universe pageant in apartheid Israel.

The chief of the Mvezo Traditional Council further stated that there is nothing beautiful about occupation, brutality, and institutionalised discrimination against the Palestinian people.

Zwelivelile further stated that “the brutal punishment and harassment meted out to Palestinians on a daily basis are horrific, detestable and a crime against humanity that must be prosecuted by the International Criminal Court.”

However, in a response to his statement, Miss Universe Iraq 2017, Sarah Idan, took to social media to share her thoughts on Mandela’s call to boycott the pageant, saying that as a man, he should rather not.

Idan bashes Mandela for making the decision, as a man, to stop Lalela Mswane, Miss SA 2021, from representing South Africa at the Miss Universe competition, which promotes the empowerment of women.

“All I can say is: how dare you? How dare you as a man try to tell an organisation for women in women empowerment what to do? This is an opportunity that millions of women dream of, having to go on a world stage and represent their people, their nation, their culture. Not governments, not politics and definitely not your political agenda,” said Idan in her video.

Idan also pleads with Mandela to allow Mswane to compete in the beauty pageant, so she can experience the world stage.

“Please allow Miss South Africa to go and experience Israel up close on the ground, and let her be the judge for herself.

“I’m positive just like me, she will be shocked to see that the Israeli government consists of Muslims, Jews, Christians, and those people not only get to vote on policies to shape their future, but they also are part of the people who have politic parties, and some of them are even Israeli ambassadors to the world,” said Idan in her video.