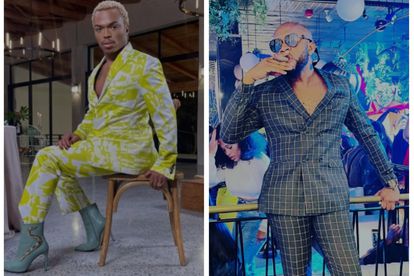 Sunny is believed to be the same guy who splurged on Somizi at Konka and Sumo last week.

According to controversial and under-fire entertainment blogger Musa Khawula, SomGaga and Sunny are officially dating.

Musa recently share a snap of the media personality with a man he claimed was Sunny, although his face was not visible. The pic was shared alongside another pic of Sunny (this time with his face visible) dressed in the same suit the man posing with Somizi was wearing.

WHAT ABOUT THE ‘ENGAGEMENT’?

Although Somizi has not come out to make things official with Sunny, this week he slammed reports that he has paid lobola for local actor Pholosho Mohlala.

According to the Sarafina star, the rumours have created trouble in paradise for his current relationships as his two partners have now started questioning him.

“There’s a story about me that I am getting married and a wedding is in plan and I’ve paid R1.5 million lobola to Pholosho. I don’t have an issue with that because I’m used to people writing sh*t about me. They only got one thing right, I know Pholosho. Pholosho is married, he’s got a wife who’s pregnant and we are just friends.

“They are causing conflict in my relationships. I have two people that I was dating, one has money and the other doesn’t have money but I have to explain to these two people what’s going on. And I was still going to choose between the two of them, which the obvious case is that I am going to choose the one with money but I have to be decent and tell him first that I was going to leave him. Now he’s left me first because of the City Press story. City Press ruined my plan,” Somizi said on Instagram.

Last week Somizi took to Instagram to tell a story about his experience at Konka in Soweto. He claimed that a rich Portuguese-speaking man (whom he said he did not know) grabbed his attention by splurging on him. First, the man sent money to his table, which he did not appreciate, and then he sent bottles of champagne.

Before the night was over, Somizi and the man were quite cosy as they had left Konka for Sumo Nightclub in Rosebank where the mystery man bought more alcohol for him and his friends and also paid his bill.

“This guy wants me. He really WANTS me. I had never been a slay queen before. It’s so nice! Being a slay queen is NICE!” he had said.

Somizi claimed that the mystery man was very rich, comparing him to another man he liked whom he referred to as L.

According to Musa Khawula, the mystery man is Sunny Obasi.

TWEEPS NOT IMPRESSED WITH SOMIZI’S BEHAVIOUR

“Somizi is now a gold digger because Mohale tried gold digging and he failed,” another tweep wrote.