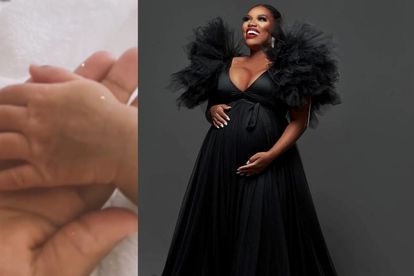 The star shared that she welcomed her newborn baby in February with a video from the hospital.

Uzalo actress Gugu Gumede has announced on her Instagram that she welcomed her baby girl last month on 23 February.

“Exactly a month ago, my life became the greatest testimony.”

“My daughter, may the heavens pave a way for your greatness, and may they always go to war on your behalf.”

“You are so dearly loved!… Come to me correct y’all, I’m someone’s mother.”

Her industry friends such as; Imbewu: The Seed’s Phindile Gwala, RHOD star Ayanda Ncwane, and Mafikizolo singer Nhlanhla Nciza have taken to her Instagram post to congratulate the new mom.

The actress previously shared that her baby kept her going during her mom’s passing.

“I have often been asked where I got the strength to continue after my mother’s passing – I got it from my unborn child.”

“At her funeral, as I stood at the podium and spoke on my queen’s behalf, I was not alone.”

“The strongest heart was beating inside of me, reviving me. I am alive today because of it.”

2022 is proving to be the year of celebrity pregnancies from Natasha Thahane, Rihanna, Blue Mbombo, Ayanda Thabethe, and Tamia Mpisane.

Here’s a list of first-time celebrity moms who will give birth this year:

The Blood and Water actress is sitting down and draped in a maroon silk two-piece outfit which reveals her growing baby bump.

Businesswoman and musician Rihanna announced her pregnancy with pictures of her bump alongside her musician baby daddy ASAP Rocky.

The singer’s pregnancy reveal broke the internet where she’s dressed in long jeans and a pink coat which covered part of her growing baby bump.

The TV personality took to her Instagram to announce her pregnancy in the last week of January this year.

The model has since shared several pictures and videos of her growing baby bump with her followers who’ve been congratulating her.

She confirmed she and Andile are expecting a baby and posted a picture of her growing bump from her pregnancy shoot.