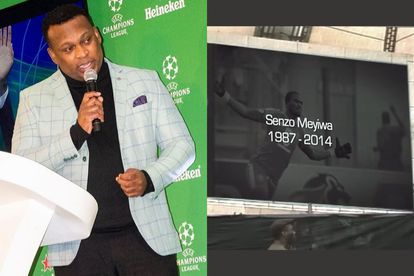 ‘SENZO: MURDER OF A SOCCER STAR’

However, the documentary also contains interviews from Senzo himself before his death and footage that date back to 2014, including that of Kelly Khumalo carrying their then seven-month-old daughter Thingo. There are also clips of interviews Kelly did previously.

Senzo was reportedly murdered in an armed robbery at Kelly’s house on 26 October 2014. Kelly, her sister Zandile, their mother Ntombi, Longwe Twala, Meyiwa’s friends Mthokozisi Thwala and Tumelo Madlala, Kelly’s then four-year-old son Christian and Thingo were in the house when Senzo was shot dead.

Senzo’s death was first believed to be a botched robbery, but as the investigation continued, it appeared more as if it was a hit. KwaZulu-Natal hitman Fisokuhle Ntuli was implicated in the murder of six people, including that of the footballer on 18 October 2021. However, the documentary dives deeper into the death of the football star.

ROBERT MARAWA: ‘WHY HIM… IN A ROOM FULL OF PEOPLE?’

“My phone started going crazy. They were talking about being at Kelly’s house. Drama, guns being drawn. There was something about a break in… but what did they take? They just took his life away… but why him if there’s a room full of people?” asked Robert.

“The stories weren’t really making sense. What was the motive? Because there was a football player who was either fighting to win for his club with a big broad smile… who was loved by the fans. Senzo was at the height of his career when he passed away,” he continued.

The documentary revealed that everyone who was in Kelly’s home at the time had to be interviewed. It seems the house was also cleaned after Senzo’s death because of his bloodshed and alcohol.