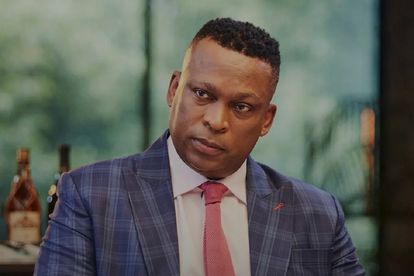 Seasoned sports presenter Robert Marawa was caught slipping in the early hours of Tuesday morning when he reacted to a tweet about nude pictures.

Since then, tweeps have been in his mentions as they express shock; with some calling him out for his reaction to the clickbaity tweet.

A Twitter user who calls herself @chantiimooi took to the social media platform to share that should the Red Devils (Manchester United) win their game week three match against Liverpool, she would post nude pictures of herself.

The trend of promising to post naked pictures if a team wins or loses has stayed with football Twitter for many years. However, it is very seldom that a woman who has made the promise follows through with it as it is often said in jest. While many tweeps already know this, some men still eagerly respond in hopes a nude or two will be posted.

With Man United indeed winning against Liverpool and registering their first win of the season, men flocked to @chantiimooi’s tweet. This included Robert Marawa who replied to the tweet with an emoji of a pair of eyes.

Marawa’s tweet caught the attention of many Twitter users who called him out for it. Many were unsettled by his tweet because of his age, as they told him he is old enough to be the girl’s father. Meanwhile, others laughed and claimed he must be “starving [sexually]”.

The 49-year-old sportscaster has a son with former Generations: The Legacy actress, Zoe Mthiyane.

Although quite private, in 2016 he publicly dated actress Pearl Thusi. Their first public appearance as a couple was at the annual Vodacom Durban July in 2016. They broke up in 2017.

Since then, Marawa has been linked to businesswoman and Real Housewives of Durban star Nonku Williams. The two stars were seen looking rather cosy during a night out in May with the A2B Winery founder also sharing some snaps of the two of them on different occasions. However, following several tweets from fans asking if they were indeed a couple, Nonku came out to reveal that they are just friends.

In the same month, controversial blogger Musa Khawula claimed that Marawa was in a relationship with Durban Gen actress Nelisiwe Sibiya. Those rumours were put to rest by the actress during her interview with Lungelo KM on his YouTube podcast entitled Engineer Your Life in July.

Addressing the rumours, Neliswe said that she and Marawa are “just friends.” She also added that she is in a relationship and she is very happy with her man, although refusing to reveal his identity.