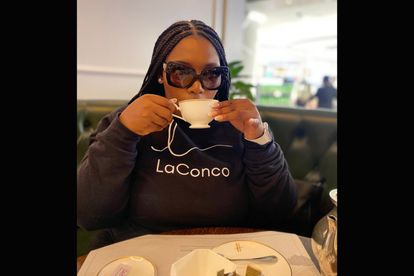 LaConco reveals her ‘RHOD’ on-screen home is a rental. Image via Twitter @la_conco.

LaConco reveals her ‘RHOD’ on-screen home is a rental. Image via Twitter @la_conco.

Reality star and entrepreneur Nonkanyiso “LaConco” Conco made the bombshell revelation that her on-screen home which was seen on the Real Housewives of Durban (RHOD) was actually a rental – via part two the RHOD reunion which aired on Showmax on Friday 13 May.

LACONCO IS UNDER FIRE FOR HER ‘LIES’

LaConco is the “baby mama” of former President Jacob Zuma. However, she revealed that they were no longer together on the first episode of the second season of RHOD, when she told her co-star Sorisa Naidoo she was raising her son with her mom.

“I never knew I would be at a stage where I am raising my son with my mom. I never fell in love… to be in this situation I am at today. I don’t think the scars will ever heal,” she said.

However, that was not the end of her love life. She received flowers while at a pool party at Jojo Robinson’s home and the card read “Petal”. So, the ladies referred to the man, who was believed to be her love interest, as Petal.

LaConco is known to be secretive but she shared bits and pieces about Petal. However, the ladies later found out these were lies. So, they thought that they did not really know her and therefore, could not trust her.

THE REALITY STAR REVEALS HER ON-SCREEN HOME IS RENTED

Amongst the other “lies” or “untruths” as RHOD star Annie Mthembu called it, LaConco was questioned about her home. The ladies wanted to know where they had been meeting her if that wasn’t her actual home.

“I did say that I’m a tenant there, I don’t own the title deed,” she said of the home she showed on-screen.

“You know what I like here? I’ve never said I owned it,” she continued.

ALSO READ: ‘A devil on earth’: MaKhumalo lashes out at LaConco on ‘RHOD’ reunion