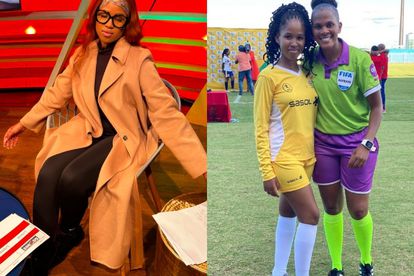 Amapiano singer Pabi Cooper pulled out her qualification to prove haters wrong after she was attacked for scoring a soccer World Cup job. Images via Twitter @cooper_pabi

Amapiano singer Pabi Cooper pulled out her qualification to prove haters wrong after she was attacked for scoring a soccer World Cup job. Images via Twitter @cooper_pabi

Amapiano musician and dancer Paballo Basetsana Mothapo, better known by her stage name Pabi Cooper, has had to defend herself right after celebrating bagging a presenting gig for the upcoming FIFA Soccer World Cup starting in Qatar on Sunday, 20 November.

ALSO READ: World Cup 2022: One South African born player will be in Qatar

On Tuesday, 15 November, the Isphithiphithi hitmaker announced that she will be hosting a SABC sports show called Good Morning Qatar.

However, the announcement was marred with negative tweets from many doubting Thomases and football fans who felt the musician was not deserving of the job.

The Bafana Ke Banyana singer also shared a screenshot of a direct message (DM) she sent to SuperSport sportscaster Lindiwe Nxumalo (nee Dube) in which she had been asking her for career advice to pursue her love for sports presenting three years ago.

At the time, Pabi Cooper was in matric and her dream was to study Sports Communicate at the University of Johannesburg.

THE MUSICIAN SHUTS DOWN BACKLASH

Some tweeps who saw Pabi Cooper’s announcement were not happy about her appointment, as some felt the SABC did not “open up the industry” to find talented and knowledgeable ladies to do the job.

Pulling out receipts, Pabi Cooper told the tweep that she plays football and is a qualified referee.

“Abutaka ake ngwana [My brother I’m not a child] 😊 been playing football for 4 years & I’m a referee by profession,” she said.

In addition, she retweet an old tweet she posted in 2020 where she wrote: “I want to be the youngest female referee in the DSTV premier soccer league.”