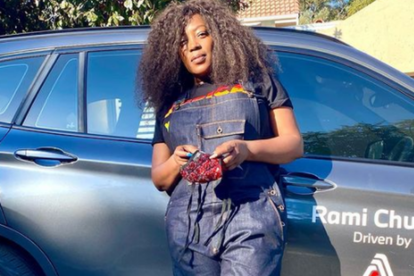 Rami Chuene is grateful to all who helped the domestic worker rise above her alleged ill-treatment. Image: @ramichuene/Instagram

Rami Chuene is grateful to all who helped the domestic worker rise above her alleged ill-treatment. Image: @ramichuene/Instagram

Actress Rami Chuene could not be happier to announce that the domestic worker who was allegedly abused by her “Madam”, has been liberated.

After having taken to social media to expose the “madam”, the outspoken celeb managed to rally her peeps. Treating someone like this is just not okay!

“TM Mahapa Attorneys Inc has taken up the case for free. And a few job offers came through for her. What was meant to destroy & demean her became a blessing. She sends her thanks to all of you, says she has never seen such kindness. She prays that you be blessed a thousand times!”

Others stepped forward to donate cash to cover the domestic worker’s “expenses” that were deducted from her pay. The generosity is truly touching.

“Domestic Worker Update: Friday is a good day to share good news. After my post, people came through wanting to contribute towards our domestic worker- so far your contributions are sitting at R15200. Your kindness and generosity is overwhelming.”

This victory touched the hearts of many. Domestic workers get taken advantage of far too often, more stands like this need to be taken.

The poor woman was made to pay for even her snacks and work that she apparently had not completed. Who does things like this?

Taking to the comment section of Rami’s updates, the people of Mzansi sang her praises. Many thanked Rami for being a voice for this woman.

TAKE A LOOK AT SOME COMMENTS