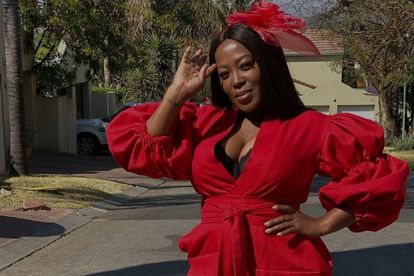 Actress Rami Chuene showed off her dance moves when she joined learners in the #HambaWenaChallenge. Image via @ramichuene/Instagram

Actress Rami Chuene showed off her dance moves when she joined learners in the #HambaWenaChallenge. Image via @ramichuene/Instagram

Actress Rami Chuene has shown the younger generation that she can get down too when she participated in the viral #HambaWenaChallenge with pupils from a school in Tembisa on Tuesday 18 October.

According to the former The Queen star, she had been attending a career fair at Ingqayizivele High School in Tembisa, Johannesburg, when the learners challenged her to dance with them.

“Bathong. School kids had me under pressure. Did what had to be done. Career fair in Tembisa,” she wrote on Instagram.

And the 47-year-old definitely gave Ama2000 a run for their money. Take a look…

Rami also shared a clip of her visit to Ivory Park Secondary School when she joined the pupils in the #BaStraataChallenge.

WHO DID IT BETTER?

The “Hamba Wena Dance Challenge” took TikTok by storm a few months ago with users from South Africa and other parts of the world participating to show off their dancing skills.

While majority of those who’ve joined the challenge have knocked it out the park, this including Rami Chuene, others just simply have two left feet.

Content creator Lasizwe Dambuza, who joined the challenge with amapiano musicians Robot Boii and Khanyisa some months ago, had all his fans in stitches when he failed dismally to perfect the dance moves.

But, Lasizwe is not convinced that he sucks at dancing, he just thinks that the problem is his audience. He told his fans this week that the Spanish are absolutely in love with his dance moves.

“Mamela! [Listen!] Yesterday I started dancing and everyone here in Spain was so impressed. I feel like I’ve been dancing for the wrong country. Because I am Kamo Mphela here. Someone even asked me for dance lessons,” he wrote on Twitter.

In a video he posted on Tuesday, he said that when he showed the people of Spain how to do the #HambaWenaChallenge, they were applauding him.

He also joked that he’d be teaching them how to do some of the classics next, which are the kwasa kwasa and izinyoka nyoka dance moves.