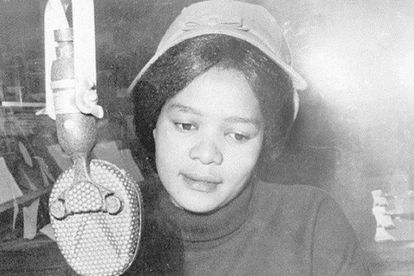 ‘Radio Queen’ Winnie Mahlangu was the first African woman employed by the SABC. She passed away at the age of 88 on Thursday 27 January. Image via Twitter @SAMNET786

‘Radio Queen’ Winnie Mahlangu was the first African woman employed by the SABC. She passed away at the age of 88 on Thursday 27 January. Image via Twitter @SAMNET786

Veteran Ukhozi FM radio presenter Winnie Mahlangu passed away on Thursday 27 January at the age of 88. The historic figure’s passing was confirmed by the SABC.

In a statement, the SABC’s group executive for corporate affairs Gugu Ntuli expressed the broadcaster’s condolences to Winnie Mahlangu’s family, friends and followers. Mahlangu passed away at the age of 88 in Pretoria, Gauteng.

“In her honour and for a continued involvement beyond her tenure at the SABC, Ukhozi FM launched the Winnie Mahlangu Female Presenter Search as part of Women’s Month commemorations in 2020.”

“This annual competition has begun to unearth new female radio talent and is set to open more doors to many other inspiring female radio broadcasters.”

Born in Witbank, Mpumalanga, in 1934, Mahlangu obtained her teaching diploma at the Middleburg Training College and taught at a primary school in Benoni before becoming a broadcaster.

Winnie Mahlangu was the doyenne of the radio as the first African woman to be employed permanently by the SABC for Radio Bantu in 1962. During that period discrimination against women and black people was rife in the SABC.

Mahlangu, along with several other Zulu-speaking radio presenters, were taken to Durban to grow Radio Zulu, now known as Ukhozi FM.

The veteran radio presenter dominated airwaves and was promoted to senior announcer in 1992. She specialised in radio programmes focused on empowering women in rural and urban areas.

Former radio presenter and Mahlangu’s colleague KE Masinga gave her the nickname: “uMafungwase”, which means first-born, because she was the only woman among men at the time. Mahlangu hung up her mic in 1993.

In 2015, she received the Order of Ikhamanga in Silver for her unmatched contribution to broadcasting.

TRIBUTES POUR IN FOR WINNIE MAHLANGU

Radio lovers took to Twitter to send their condolences to Winnie Mahlangu’s family and in remembrance of her legacy.

Broadcaster Penny Lebyane wrote: “The first to ever do it.”

Details of her funeral is yet to be released.