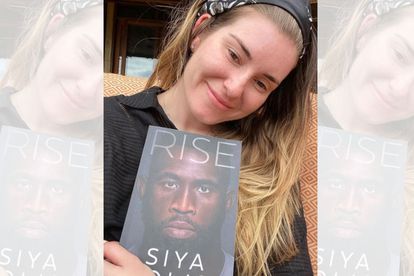 Rachel Kolisi recently took to Instagram to share her thoughts on Siya Kolisi’s memoir, saying that she read it slowly in order to take it all in.

Rachel shared her thoughts on her husband’s memoir, Rise, which chronicles the rugby legend’s rise to greatness, from his humble beginnings to becoming the first black man to lead South Africa to victory at the Rugby World Cup in 2019. The book has been dubbed “a must-read” as Siya details his successes both on and off the rugby field, his upbringing in a township outside Gqeberha, as well as his battle with substance abuse, particularly alcohol, and how it almost cost him his family.

In one chapter, he recalls falling in with the wrong crowd after the death of his grandmother, with his aunt taking over as caregiver.

“It was at a time when I was starting to hang out with some kids a bit older than me and doing what they were doing: drinking, smoking weed, sniffing petrol,” Siya said.

Now, after she had the books for weeks, Rachel says she has been “reading through it slowly, just taking it all in.”

She was even surprised by some of Siya’s stories. “I may be married to the guy but there were so many stories I had never heard before, I laughed, I sobbed, I often had to stop and think about the MANY important points that were raised.”

Rachel says that Siya has been so “vulnerable on these pages, in the hopes that someone is impacted and chooses to live better, and dream bigger”.

“A true South African story that I really believe should be in everyone’s hands. Unpacking toxic masculinity, GBV, how to manage pressure, and the importance of living with intention, to name just a few. Most importantly how to RISE even when everyone expects you to fall,” she said further.