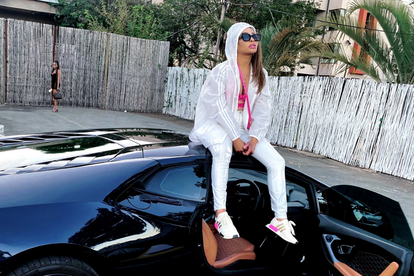 A Zimbabwean prophet recently prophesied that there is a South African socialite that needs to turn to God as quickly as possible. While the prophet did not mention exactly who the socialite is, he did offer her initials which are K.M. Of course, locals were soon speculating and many quickly guessed he was speaking about Khanyi Mbau.

A prophet has an important message for a Mzansi socialite

Khanyi Mbau recently found herself at the top of Twitter trends after she ditched her millionaire boyfriend in Dubai following what is believed to be a lovers spat.

Her man Kudzai Mushonga was beside himself in a number of videos pleading with his woman to come back and soon became the center of many jokes made by South Africans who grabbed some popcorn as they watched the high-profile couple’s drama unfold.

Not long after this, a Zimbabwean prophet from Divine Kingdom Baptist Ministries prophesied about a South African socialite who needs to turn to God and become a “powerful woman of Christ.” In a video shared on YouTube, the prophet doesn’t mention a name but does reveal the initials of the mystery woman – you guessed it, the initials are K.M.

“We must continue to pray for celebrities in South Africa. There is a certain young lady…I don’t know whether the term young lady would apply to her, but she’s a socialite. She has been involved with very prominent men in the past.

The prophet was pulling wool over no one’s eyes. Many people quickly jumped to the conclusion that he is speaking about none other than Miss Khanyi Mbau who recently dribbled her Zimbabwean boyfriend.

Even Khanyi wasn’t fooled and soon shared a cryptic response to the prophecy on her Instagram page. The celeb shared the clip on her IG story while captioning it:

“Little do they know…”