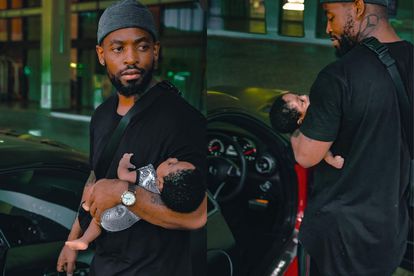 Prince Kaybee buys stake in vineyard and names wine after his son. Image via Instagram @princekaybee_sa.

Prince Kaybee buys stake in vineyard and names wine after his son. Image via Instagram @princekaybee_sa.

Entertainment commentator Phil Mphela reported that South African DJ Kabelo Motsamai, popularly known as Prince Kaybee, bought a stake in a Vineyard and will be naming a wine after his son.

Prince Kaybee and his long-time girlfriend Zola Ayabulela Mhlongo, popularly known as Zola Zeelovin, hit a rough patch in their relationship in May 2021. This was when Prince Kaybee admitted to cheating on Zola after his “side chick” went public with screenshots and screen recordings.

The pair stayed lowkey on their relationship status for months, until Zola shocked Mzansi with her pregnancy announcement in October 2021. Many were not sure whether the pair were still together and if the Club Controller hitmaker was the father.

Prince Kaybee then confirmed he is the father in an interview with Tshisa LIVE towards the end of October 2021.

“I’m easily triggered … it’s not easy [turning the other cheek] psychologically how I grew up. You need to stand up for yourself as a man. As a boy it’s too much responsibility, so for me it f***ed with my mind for a very long time, [until] I met the girl of my dreams and we’ve been trying and trying … those kinds of little things, gestures of love, they change you,” he continued

The pair welcomed their son on 20 October 2021. Prince Kaybee also has another son from a previous relationship.

Phil Mphela reported that the DJ bought a stake in Tulbagh Western Cape at the Blue Craine Vineyards. He went on to say that Prince Kaybee will be naming a wine after his son. Take a look…

“BRANDS: Prince Kaybee buys stake in vineyard. Businessman & hitmaker, has bought a stake in Tulbagh Western Cape at the Blue Craine Vineyards. The star will drop a wine brand soon called Milani, named after his son,” he tweeted.