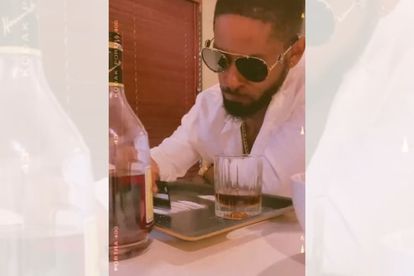 Prince Kaybee has teased a video of him seemingly handling a white, powdery substance that appears to resemble the drug cocaine.

The music producer and DJ had fans in a tizz with the clip which he posted on his Twitter and Instagram accounts.

But it’s not at all what you think…

In the clip posted on his social media accounts on Tuesday, 8 February, Prince Kaybee is seen sitting at a table covered in a white powdery substance.

Donning a pair of shades, Prince Kaybee takes a sip of what appears to be whisky, whilst he cuts lines in the powder with a card. The action is similar to that of a user as they prepare to snort cocaine, a “Class A” drug.

The hitmaker used a Snowman emoji to caption the clip, referring to cocaine’s street name “snow”. Playing in the background is the soundtrack to the clip from the Netflix series Narcos – which follow Colombia’s violent and powerful drug cartels.

But the clip proved to be a very convincing prank. In a move no-one saw coming, Prince Kaybee whips out a piece of raw meat, which he dips in the white powder – which is now believed to be salt.

The star’s followers thought the clip was hilarious and took to the comments section to let him know.

“I was worried & scared at the same time. I’m in stitches!”

“I already see Hawks pulling up at your house tommorow morning”

“I was waiting for the sniff only to see steak!”

“You watch too many Mexican movies, Prince Pablo”

“With a whole straight face!”