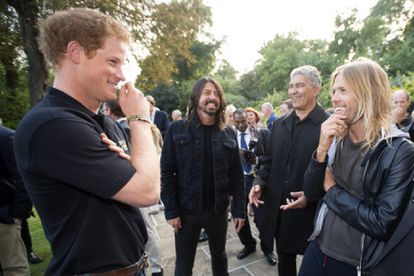 “Slap” is probably the word of the week after actor Will Smith smacked comedian Chris Rock at the Oscars award ceremony on Sunday 27 March. Another celebrity who’s had a stinging clout from someone just as well-known is the late Foo Fighters drummer, Taylor Hawkins, who sadly passed away on Friday 25 March, at the age of 50.

HAWKINS ON THAT TIME PRINCE HARRY SLAPPED HIM

In 2014, the late Taylor Hawkins received an awakening (literally) when the Duke of Sussex slapped him so hard he saw stars.

Speaking about the incident a few years later on The Howard Stern Show, the musician – who reportedly died due to a cardiovascular collapse – jokingly said the Prince Harry slap “p**sed” him off.

“We were playing somewhere in England and we’d just flown over and literally had had like two hours sleep and we were doing a show in some ambassador’s back yard or something.

‘Are you awake now?’

Hawkins then said the royal proceeded to slap him across the face…in a bid to wake him up.

The late drummer in the end however admitted that being slapped by a prince was “okay, really”.

The Foo Fighters’ band member died in a hotel in Bogota, Colombia, shortly before the group was set to perform at the Festival Estereo Picnic on the city’s outskirts on Friday evening 25 March.

Colombian investigators said preliminary post-mortem tests found several drugs in the musician’s system but did not specify whether the mix caused his death.

After news of his passing, several musicians and fans have paid tribute to Hawkins, including singer Miley Cyrus who announced that she was dedicating her Saturday performance at Lollapalooza in Brazil to her late friend in a tweet shared prior to the show.

“LAST NIGHTS SHOW IN BRAZIL IS DEDICATED TO MY FRIEND & LEGEND #TAYLORHAWKINS,” she wrote.