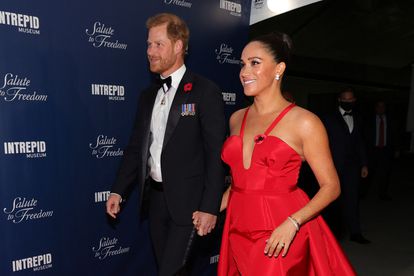 Prince Harry and Meghan Markle made a bold return to the red carpet on 10 November when they attended the 2021 Salute To Freedom Gala at Intrepid Sea-Air-Space Museum in New York City.

Prince Harry and Meghan on the red carpet

The couple, who stepped down as senior members of the royal family in 2020, attended the event with the likes of Jon Bon Jovi to honour military veterans.

According to Harpers Bazaar, Meghan wore a stunning, scarlet red gown by Carolina Herrera complete with a plunging neckline, flowing train, and a fitted waist, while Prince Harry was dressed in a black tuxedo for the special ceremony. Both Meghan and Harry wore red poppy flower pins as a nod to the UK’s own Remembrance Day on 11 November.

Prince Harry – who is a military man himself – discussed the isolation service members often feel when returning home, and stressed the importance of supporting veterans.

“My experience in the military made me who I am today, and I will always be grateful for the people I got to serve with — wherever in the world we were,” said Harry, who served a decade in the British army and two tours in Afghanistan.

“But in war, you also see and experience things you hope no one else has to,” he said. “These stay with us, sometimes like a slideshow of images.”

He then went on to welcome the 2021 Intrepid Valor Award honorees, who he said “are part of an everlasting bond. You are part of the team of teams. And we will always have your backs. You are not alone.”

On the red carpet, reporters asked Meghan if she was proud of her husband, she said:

“I’m always proud of him,” she answered.