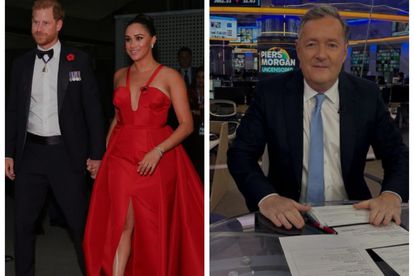 The controversial journalist joined Fox & Friends on Monday, 21 November, to discuss why he believes it is “absolutely disgusting” and “outrageous” that the Duke and duchess of Sussex received the high honour.

Piers Morgan started by condemning Kerry Kennedy, frankly “for besmirching the name and memory of her father”.

“The idea that these two little grifters, who quit royal duty, quit Britain… exploited and fleeced their royal titles for hundreds of millions of dollars straight in their back pocket…the idea that they’re being lauded as some kind of heroes in America by your own sort of royal family, if you like, the Kennedys, it really sticks in my gullet,” he said.

He further accused Prince Harry and Meghan Markle of “trashing” their families on national television.

“Harry has this book coming out, and he’s going to do it all over again to his father who’s now the king, who’s still mourning, of course, the death of his mother.”

A fuming Piers Morgan also took at dig at his former friend’s acting skills, saying she was “two-bit mediocre actress”. He also accused her of taking their “favorite prince” to America.

“And I’m sorry, but as a monarchist and as somebody who loves this country, I think it’s completely outrageous that they are now being given the cloak of honor and prestige and branded heroes by a Kennedy… Honestly, words fail me,” he concluded.

Meghan and Prince Harry are being rewarded for taking a stand against what they claimed was Royal family racism during their high-publicised and explosive interview with Oprah Winfrey in March last year.

This came after the couple stepped down as senior members of the royal family last year – with Prince Harry saying he was scared of “history repeating itself“.

The pair alleged that a member of the royal family had made a racist comment about the skin colour of their then unborn son Archie.

She told El Confidencial : “They went to the oldest institution in UK history and told them what they were doing wrong, that they couldn’t have structural racism within the institution; that they could not maintain a misunderstanding about mental health.