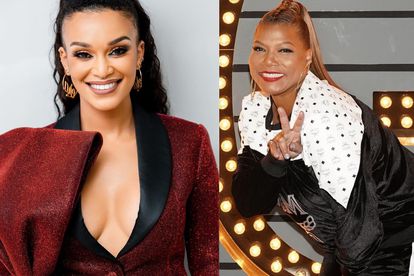 Queen Latifa sent Pearl Thusi a shout-out filled with love and appreciation. She also hinted at a potential collaboration together someday. Take a look…

“Pearl Thusi … I just wanted to give you a shout-out to let you know sister you are strong and bad. I’m watching you do your thing, you keep doing your thing and one day maybe we can be able to do something together. That would be hot,” said Queen Latifa.

PEARL THUSI: ‘I THOUGHT IT MUST BE A MISTAKE’

Pearl thusi shared a length Instagram post about how Queen Latifa’s shout-out made her feel. She reflected on the pain she felt over the last two years including the death of her father and Queen Sono being cancelled.

“The pain I’ve been through in the last 2 years is something I’ve hidden so well. Losing my father, heartbreak, the cancellation of QS & watching people celebrate that while the sting continued to burn from something out of my control… And now as soon as I thought one of the most epic weeks of my life had come to an end,” she wrote.

“I once sat behind her & Jada PS at the BETs… while I looked for my seat- I spotted them, went on my knees and greeted them. No picture, it didn’t feel right- I wanted more than just a picture. I just told myself- I want them to know my name one day… one day I want to work with them. I just thanked them for being an Inspiration,” she continued.

“When I was sent this I thought it must be a mistake- I was in a loud environment and thought Harrison was just showing me who he was working with & I congratulate him but then he says, “she said she loved QUEEN SONO when we were talking about African content and I told her I know you so we took this video to celebrate you…” me.

Take a look at the video…