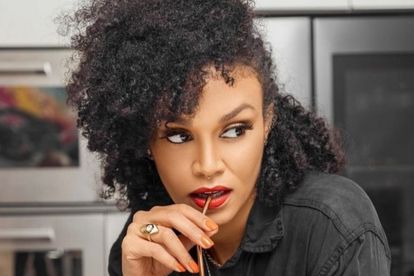 Pearl Thusi saw her name top the trends list this week after she liked and reacted to a tweet insulting Ari Lennox.

The SA actress and media personality was dragged after she laughed at a post calling the US singer essentially “ugly”. But the star defended her Twitter activity insisting it was an “inside joke”.

It all began when Twitter personality “Mr Smeg” posted a tweet that said: “Ari Lennox is not beautiful”.

The social media commentator – whose real name is Michael Bucwa – is known for his posts showing appreciation to various female celebrities. However, following a week of trending due to her clapbacks at South African fans, Ari Lennox has found herself as a public enemy of Black Twitter.

Pearl Thusi retweeted Mr Smeg’s post and also responded to it with a series of laughing emojis.

“Wait! Guys! (This doesn’t mean I approve this message)”, she tweeted.

She defended her actions, tweeting: “Why that tweet is funny actually has very little to do with Ari. It’s a private joke in South Africa. I think Ari is gorgeous”.

But Pearl Thusi was targeted by Twitter trolls who claimed her actions were uncalled for.

“How are you laughing when they’re bringing down another black woman?”

Allegations of colourism entered the chat and tweeps called Pearl Thusi out for “hating on dark skinned women”.

“We’re only debating whether she’s beautiful or not because she is a dark skin beauty. It’s not shocking anymore, really”

“Black skin disgusts Pearl Thusi so much. She hates dark skin for sure”

A DATE WITH MR SMEG

Meanwhile, following Pearl Thusi’s public endrosement of his tweet, Mr Smeg attempted to shoot his shot with the star.

He tweeted: ”Hi @PearlThusi, May I take you out for lunch?”

He also tweeted an image of the star, posting: “Pearl Thusi is beautiful”

To his sheer surprise, Pearl Thusi obliged and the pair agreed to meet for a lunch date at Jozi’s Daruma restaurant this coming Saturday.

Naturally, tweeps reacted to the news, citing it a “match made in Twitter heaven”