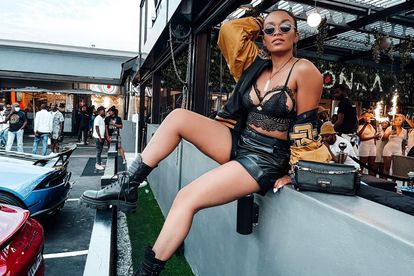 This past long weekend saw most South Africans lighting up the braai fires while others stepped out for a much-needed groove with their friends. Actress Pearl Thusi did the latter by heading to one of Soweto’s upmarket nightclubs…but things went south very quickly when she had a “traumatic experience” with girls inviting themselves to her table and acting ill-mannered.

Taking to Instagram Live on Tuesday, Pearl went on a rant, saying she is considering bringing security along with her to the clubs to avoid it from happening again and wants people to improve their “groove etiquette”.

Pearl Thusi: ‘Did this girl not vomit in the bucket?’

“I’m just telling the world, don’t you ever bring your b*tches to my table, unless I know you like that … drinking my shit … Did this girl not vomit into the bucket? I had a very traumatic weekend actually … I’m bringing security next time,” she said.

PEARL THUSI AND HER HUBBY BUBBLY

The Queen Sono ordered a hubbly bubbly and had a few “issues” with people who invited themselves to enjoy the hubbly with her.

“If you’re not my friend and we’re in the club, please can you leave my hubbly alone? Don’t ask for it. Order your own hubbly.”

Thusi also briefly spoke on hygiene protocol during the time of COVID-19:

“There’s a pandemic, now we’re touching the pipes at the same time, people are not sanitising… At least leave my hubbly alone.”

For those who might not understand just how hubbly bubbly works, here’s a quick rundown. The maximum amount of pipes available for hubbly is four. While one person smokes, the others must block their pipe so that person can enjoy the smoke coming through the hubbly.

Pearl Thusi noted that the worst thing about sharing a hubbly is asking someone to block their pipe.

“Now we’re looking at each other waiting to see who’s going next.”

‘WHY MUST I CARRY YOUR WHOLE CREW?’

Something else the former Behind The Story presenter brought up in her rant, was having to pay for others at the club.

A few takeaways from Pearl Thusi’s rant… Pay your own way at the club, because she won’t!