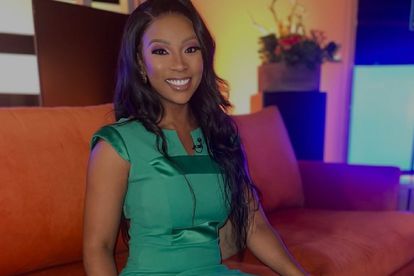 Pearl Modiadie was recently linked to sportscaster Andile Ncube after an article by City Press reported that the two media personalities were spotted together.

However, in a statement released on Tuesday 26 April, the former Zaziwa presenter denied the rumours, claiming she is dating “her partner”.

Well, her partner has been found and he is no other than dancer and singer Denise Zimba’s brother Kgosi Zimba!

The mom-of-one and her new bae were allegedly hooked up by Denise. The couple was spotted at Denise and Jakob Schlichtig’s star-studded wedding which took place at the beautiful Blaauwklippen Wine Farm in Stellenbosch.

According to controversial social media entertainment commentator Musa Khawula, Kgosi was previously an engaged man but is no longer with his partner of five years.

“Kgosi Zimba dumped his fiancée and business partner from Pretoria after they were together for 5 years. Kgosi Zimba advised the fiancé in distraught to not attend Denise Zimba’s wedding coz Pearl was attending,” the tweet reads.

More reports suggest that his fiancée found out about the former Metro FM presenter’s rumoured relationship with Kgosi when she saw his tattoos. What Musa means by this, however, is yet to be revealed to us!

Pearl and Kgosi can be seen kissing at the wedding in the first frame below.

The radio and TV personality did not deny being in a relationship through her personal statement this week. In fact, she made it known that she is seeing someone but they are keeping it private.

In January 2021, she announced her split from the father of her son, Nathaniel Oppenheimer. After that, the beauty was not linked to anyone until reports about the Metro FM sports presenter emerged.

The news came as a shock as Andile was believed to have had a fling with socialite Zarina Hassan, popularly known as Zari The Boss Lady. This was especially widely known by viewers of the Netflix reality show Young, Famous and African.

Pearl however moved swiftly to address rumours of dating Andile in a statement she posted on social media as she made it clear that she “is not in a relationship with the said party”.