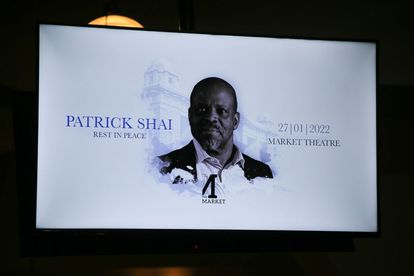 It’s been said that some people have a premonition of their passing before they die – could the same be true for actor Patrick Shai?

The veteran TV star shocked the country after news emerged of his suicide last week. This after close friends he was going through a rough patch after a “character assassination” on social media.

Now a video has emerged of Patrick Shai speaking about death just a week prior to his untimely and unexpected passing.

In a video shared on actor Hlomla Dandala’s Instagram page, Patrick Shai is seen addressing the cast and his fellow colleagues on The River.

Joined by actors Seputla Sebogodi and Tinah Mnumzana, Patrick Shai can be heard praising the production and his “privilege” of working on it.

He said: “…it’s a wonderful space, If I were to die after this production, it would be cited on my arrival to inyanya zam no unkulunkulu (my ancestors and God) that I have had the last great moment working with wonderful people at this wonderful company.”

Patrick Shai played the role of Phasha in the 1Magic telenova.

Hlomla captioned the clip: “He loved what he did. Recorded approximately 1 week before his passing”.

Many followers commented that the actor’s words were reflective of him possibly knowing that he was living his “last days”.

“Ohh man, he knew that his time was very close. May his soul rest in peace”, read one Instagram comment.

Both Septula and Tinah have paid tribute to Patrick Shai in heartfelt social media posts.

Seputla, meanwhile posted a well-known clip of his and Patrick Shai’s characters Mohumi and Phasha respectively, from The River.

He captioned the clip: “We’ve lost a giant in the industry. One of the best. I’d like to thank you for the wisdom and the drive . REST IN PEACE”.