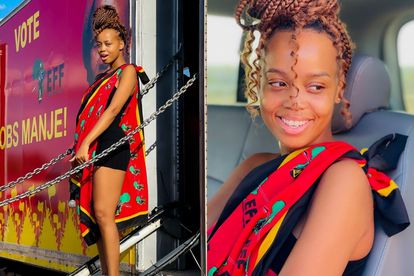 Actress Ntando Duma was one of the few local celebrities who boldly supported the Economic Freedom Fighters (EFF) in the build-up to the local elections on Monday 1 November. From Free State to Mpumalanga, Duma joined the EFF as they campaigned around the country and she reflected on the journey noting that she “believes” in the party.

ALSO READ: ANC VS EFF: Which political party has the hottest celebs behind them?

NTANDO DUMA’S SUPPORT FOR THE EFF

Ntando Duma has always shown her support for the EFF over the years.

According to TshisaLive, the Rhythm City and The Queen actress was one of the first artists to receive funds from the EFF Relief Fund after party leader Julius Malema announced they would be backing artists who showed their support for the party.

“Your guys’ obsession with me and my affiliation with the EFF is now starting to become extremely weary. To even write an entire paragraph with groundless and unjustified facts,” wrote the mother of one.

Along with Skeem Saam actors Cornet Mamabolo, Clement Maosa and energetic entertainer Uncle Vinny, Ntando Duma joined the EFF to gather votes for the party. The celebs got down to some amapiano at a community meeting in Emalahleni, Mpumalanga, last month.

“When we said we are running the country we did not lie! We literally travelled from province to province, city to city and township to township. We RAN THE COUNTRY, CHIEF!”

“We did it with so much devotion and endearment in hopes for restoration of the black child’s dignity.”

“Now we hope for the people to have heard our cries and voices and do the right thing and VOT FOR the Economic Freedom Fighters. We hope for a better way of living and better opportunities for our black people moving forward.”

“Not a paid post ke le bahlali, I believe in the EFF.”

ALSO READ: Ama-politicians: Will they hit the right note with amapiano moves? [watch]

As the results for the municipal elections are set to be finalised within the next few days, some Mzansi tweeps shared their opinions about Ntando Duma’s old support for the EFF.

Responding to a tweet by the EFF’s national communications manager Sixolise Gcilishe thanking South Africans for supporting the party, one tweep wrote: “NOT even Ntando Duma’s revolutionary a** could help EFF.”

Another tweep highlighted that Ntando Duma is actively involved in “on-the-ground activities”.

“Not just EFF events to secure the bag like ANC mascots.”